David Crosby: Remember My Name (B).  I caught this new documentary and learned a few things about music legend David Crosby, who is somehow still alive and making music at 76 despite doing an astonishing amount of drugs up into at least the 1980s.  For example, his father was Floyd Crosby, a photographer who won a Golden Globe for cinematography for High Noon.  He was a founding member of The Byrds, which I should have known but don’t think I did.  He didn’t like The Doors because Jim Morrison was rude to him once.  And none of the other members of Crosby, Stills, Nash and Young are on speaking terms with him.  The film does a good job of conveying the trippy music scene of the 60s and 70s.  But it left me wanting to know more about Crosby’s personal life.  Like, what happened to his brother, who is mentioned as also being into music when they were kids?  And I think he mentioned in passing that he’s not on speaking terms with his daughter.  What’s the story there?  But it wasn’t bad, and I appreciated the efficient 95-minute run time.

Apollo 11 (A).  Longtime readers of this blog know The Movie Snob doesn’t hand out the “A” very often.  This new documentary was a solid “A.”  It consists almost entirely of film footage and a few photographs from the first moon landing back in 1969.  The first 20 minutes of the film’s efficient 93-minute run time lead up to lift-off.  We briefly meet the astronauts and get lots of footage of the rocket, the control room, and the many, many ordinary folks who camped out to watch the historic event.  Did you know there were a couple of pre-lift-off alarms about a leaky valve?  Neither did I!  But the countdown continues, and then we’re off and running.  Even though we all know what happened, I was on the edge of my seat for every key moment of the mission–the rocket burns, the spaceship separations and dockings, and of course the landing of the moon lander itself.  And there’s no contemporary voiceover; just a couple of snippets of Walter Cronkite’s reporting.  It’s like a time capsule from 50 years ago.  Check it out.

A new movie review from The Movie Snob.

California Typewriter  (C).  This new documentary about typewriters and the people (mostly men) who love them is strangely uncompelling.  We learn a little about the invention of the first practical typewriter in Wisconsin in the decade or so after the Civil War.  We have some monologues by some people who still use and love typewriters, such as Tom Hanks (That Thing You Do!), John Mayer, and David McCullough (1776).  We meet a collector of old typewriters who is still trying to get hands on one of the very first run of typewriters produced in Wisconsin back in the day.  We meet the folks who own and run one of the last typewriter repair stores (called California Typewriter).  And we meet a guy who disassembles old typewriters and makes sculptures with them.  One of the first Christmas presents I can remember wanting as a kid was a typewriter, and yet this documentary still didn’t do much for me.  Maybe the four other people in the movie theater with me liked it more than I did.

Born in China  (B-).  I don’t think I have seen one of these “Disneynature” Earth Day releases in a while.  This one focuses on several species indigenous to China.  Cranes and a certain kind of antelope get brief coverage, but the movie focuses on the giant panda, the snow leopard, and some kind of snub-nosed monkey I had never heard of before.  The photography is exceptionally good, as you would expect, but the narration (provided by John Krasinski, Leatherheads) is way too sentimentalized and occasionally downright goofy.  There’s very little gore, but there is still a death that might trouble the little ones and the exceptionally tenderhearted.  Personally, based on the previews, I’m hoping for more from Disneynature’s 2018 release Dolphins.

Peggy Guggenheim: Art Addict (B).  Happy MLK Day!  As a government employee, I had the day off, so I thought I’d check out this new documentary.  I presumed I would have the theater virtually to myself, but surprise!  There were probably 60 or 70 other moviegoers there for the 1:15 show.  Who’d have thunk it?  Anyhoo, I knew nothing about Peggy Guggenheim going in, so this documentary–biopic was very educational for me.  PG was born in 1898 and lived until 1979, and in between she became one of the most influential people in the art world, despite having no formal training.  Instead she had some money (being an heiress), a good eye, and some excellent advisers, as well as a personality that allowed her to meet and befriend (ahem) many of the artists who came to define the 20th century.  Jackson Pollock was apparently one of her discoveries.  Anyway, she lived an unconventional and seemingly pretty sad life, but it made for an interesting movie.  Among many other things, I learned that both parents of actor Robert De Niro (Stardust) were artists whose work was shown by Guggenheim back in the day.  Worth seeing, if you like this sort of thing.

From the desk of The Movie Snob.

Best of Enemies  (B+).  This may be the first documentary I have seen this year.  It is about the Republican and Democratic National Conventions of 1968, and more particularly about ABC’s decision not to provide wall-to-wall, gavel-to-gavel coverage of the conventions, but rather to broadcast only selected highlights from the conventions, followed by “debates” between a well-known provocateur from each end of the political spectrum.  Those provocateurs were William F. Buckley, Jr. and Gore Vidal.  The movie consists in large part of contemporaneous news footage about the conventions, as well as excerpts from the “debates” themselves.  I use scare quotes because, as far as I could tell, Buckley and Vidal used the occasion mainly to insult each other, and certainly not to discuss in depth any of the salient issues of the day.  As a long-time subscriber to National Review and admirer of Buckley, I winced when the movie finally got to the most famous exchange between the two, when Vidal called Buckley a “pro- or crypto-Nazi,” Buckley lost his temper, called Vidal a “queer,” and threatened to punch him in the face.  The film-makers want to trace the shouting style of modern punditry to the Buckley–Vidal debates, but I can’t imagine things would be much different by now even if Buckley and Vidal had been more civil and actually made arguments.  Nevertheless, I thought it was an interesting and well-made movie.

New from The Movie Snob.

Island of Lemurs: Madagascar (B). I do enjoy a good IMAX nature documentary, and this was a pretty good one. Morgan Freeman (Evan Almighty) narrates this 40-minute overview of the lemurs of Madagascar. We also meet an American scientist Patricia Wright, who has devoted her life to studying the critters and, of course, trying to protect their habitat from human destruction. The lemurs are pretty interesting, especially the adorable little mouse lemur (but note the thick gloves worn by the lab tech handling the little guy. I bet he has sharp little teeth!) And the scenery of Madagascar is pretty gorgeous too, with lots of huge stone formations jutting up unexpectedly out of the forests. This one is good for all ages–there aren’t even any disturbing scenes of animals getting killed or eaten or anything. 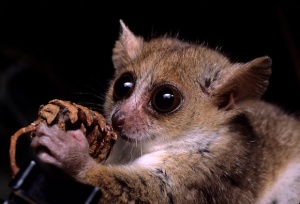 The Movie Court
Blog at WordPress.com.